What an incredible week at the Cheltenham Festival for Kalanisi. He sired two winners over fences on the opening day courtesy of The Conditional and Imperial Aura and also sired Darver Star who finished 3rd in the Gr.1 Champion Hurdle on the same day. To round off a great week, he was the broodmare sire of Indefatigable- the final winner of the festival in the Martin Pipe Conditional Jockeys Handicap Hurdle. 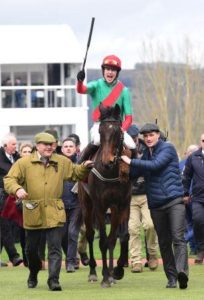 The first winner on Tuesday was the David Bridgwater trained ‘The Conditional’ in the Grade 3 Ultima Handicap Chase. Run over 3m 1f, the £110,000 event is always one of the most competitive handicap chases of the year and this year was no different with the top weight rated 159 and a field of 23 going to post. In the hands of Brendan Powell, The Conditional was having his 5th start for Bridgwater, having previously raced in Ireland for Martin Hassett. He has proved an inspired private purchase for owner PJ Cave, winning a £50,000 chase at Cheltenham in October on his 2nd start in the UK and then finishing runner-up in the £250,000 Ladbrokes Trophy Chase at Newbury in November. His five starts this season have earned him over £155,000.

Bred in Killorglin in Kerry by Brendan Ferris, The Conditional is the last of just four foals bred from the Saddlers Hall mare Gorrie Vale. He was bought by Hassett for just €9,000 at Tattersalls August Sale. 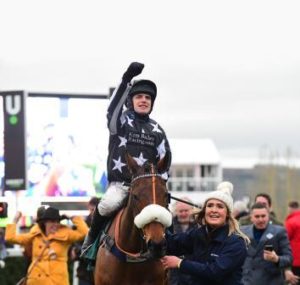 The 2nd leg of the double was the victory of Imperial Aura in the LISTED Northern Trust Novices Handicap Chase. The Kim Bailey trained seven year old ran out the emphatic winner of the 2m 4f event worth almost £40,000 to the winner. Never out of the first three in nine races to date, Imperial Aura looks a fascinating horse for the future in open chase company. He won this race off a mark of 143 and was raised to 157 after this impressive performance which was only his 4th race over fences. As with all his starts to date, he was ridden by David Bass and put in a superb round of jumping for a horse with relatively little experience over the larger obstacles. He runs in the familiar colours of Imperial Racing who have enjoyed success with other progeny by Kalanisi such as Imperial Eloquence, Imperial Acolyte and Imperial Elysian who has won his last 2 outings for Fergal O’Brien.

Bred by Headfield Farm in Wexford, Imperial Aura was shrewdly purchased by Susan Traynor of Crillea Farm in Monaghan for just €5,800 as a foal at Tattersalls November Sale. She re-offered him as a three year old at the Goffs Land Rover Sale and he was cleverly snapped up by Kevin and Anna Ross for €26,000, who then broke him in and pre trained him at their Mount Top Stud in County Antrim.

Sandwiched between these two brilliant wins for sons of Kalanisi was an outstanding effort from another of his sons in the Grade 1 champion Hurdle. The Gavin Cromwell trained Darver Star has proved a revelation this year, winning off a mark of 104 last April, he has progressed through the ranks in incredible fashion. A sequence of 4 wins this season was followed by a 3rd place finish in the Royal Bond Novice Hurdle before chasing home Honeysuckle in the Irish Champion Hurdle at Leopardstown in February. Last week then saw him post a career best effort by finishing 3rd behind Epatante and Sharjah in the blue riband for hurdlers at the Cheltenham Festival. This has been a brilliant story for racing in general as he races in the colours of his two breeders Pat Cluskey and Sean Fanning along with a 3rd member of the syndicate Simon Fagan. All 3 men are from County Louth and showed great patience and perseverance that many others wouldn’t have shown by waiting for Darver Star to make his first appearance on a racecourse as an almost seven year old following two different serious injuries in his younger days. He has rewarded his owners with many great days and with a bit of luck there are plenty more ahead.

Overall a wonderful week for Kalanisi whose progeny have enjoyed many excellent results at the Cheltenham Festival in the past including Katchit winning the Triumph Hurdle and Champion Hurdle, Fayonagh winning the Champion Bumper and Grade 1 runner-up finishes for Kalashnikov, Brain Power and Barizan. The next chance to buy a possible future festival winner by Kalanisi will be at the upcoming horses in training and store sales. Here’s hoping they go ahead!